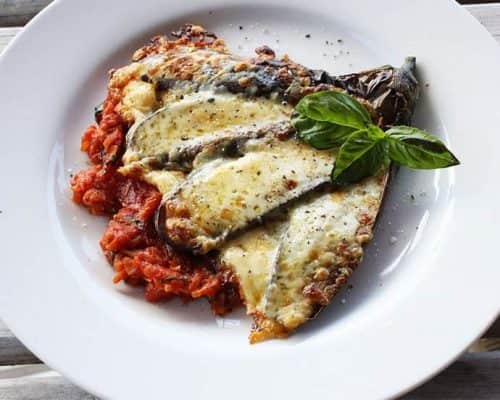 According to some, the term “parmigiana” immediately refers to Parmigiano, a typical cheese from Emilia Romagna. However, regarding the name there are also other theses: some argue that it derives from the Sicilian dialect term “parmiciana”, which indicates the wooden rod of the window shutters, a shape recalled by fried eggplants arranged in overlapping layers. The thesis of Sicilian origin would be supported by the Sicilian term “Petronciana”, with which the variety of eggplants used is defined, and from which (according to the Sicilians) the name of the dish would derive and also from the presence, in the oldest recipes, of pecorino Sicilian. The Sicilian origin of the term, however, is not confirmed by the Italian dictionaries. According to the Devoto Oli dictionary, in fact, the term Parmigiana means “cooking in the manner of the Parmesans, that is to say the inhabitants of the city of Parma, means cooking vegetables in layers”. It would therefore not be a reference to the cheese used but a way of preparing vegetables, not only eggplants, but also pumpkins, courgettes and parsnips, sliced ​​and arranged in alternate layers together with other ingredients, typical of Parmigiani.