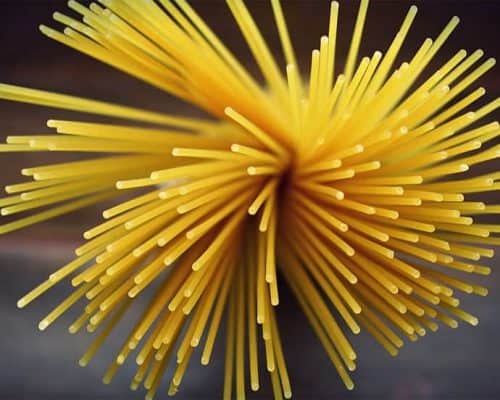 In the Spaghetti Espresso course you will only prepare the sauce and cook the pasta according to Italian tradition.

Considered as the most popular type of pasta in the world, the term “spaghetti” made its first appearance in 1819 in the “Dictionary of the Italian language” by Tommaseo and Bellini. Subsequently, around 1824, this type of pasta can also be found in the playful poem “Li Maccheroni di Napoli” by Antonio Viviani. Until then the term “spaghetti” had not become part of the official nomenclature, as it belonged to popular jargon.

Legend says it was the Venetian traveller Marco Polo who imported the recipe of spaghetti from the Middle East in the 13th century. The name of this pasta origins from its shape as it resembles a “spago” (a cord). The fame and goodness of this format did not remain limited to Italy and it spread in the United States even before Italian immigration, thanks to the favourable propaganda of the American President Thomas Jefferson (1743-1826), who also imported a machine to prepare them in his country.